Today we are taking a trip through the archives to revisit a significant project from the Darbyshire catalogue, Vito Acconci’s ‘Collision House’. The original installation and concept were created in 1981, and subsequently re-made by Darbyshire in collaboration with the MA in Curating at the RCA…

To create a full, working replica of a previously destroyed artwork by seminal 60s conceptual artist Vito Acconci. Clients were students from the MA course in curating at London’s Royal College of Art. The recreated work ‘Collision House’ was to form part of the student’s end of year exhibition ‘Art In Ruins’.

Darbyshire was supplied with original documentation, photographs and maquettes. Development of the project involved liaising both with students and the artist. A working model was first achieved followed by a matching of materials to the original, such as corrugated aluminium sheeting, pulley mechanisms and reclaimed bicycle parts. A fully working reproduction was then created.
Collision House is an interactive artwork in which the viewer is able to move the various elements on rails. With this in mind, the piece had to be robust and able to stand repeated use. Darbyshire installed the work onsite, including the laying of floor tracks, and tested to ensure its full operational status.

On completion, Collision House was fully endorsed by Acconci, and his level of satisfaction was such that he gave his authentication for the work to continue in existence after the exhibition. 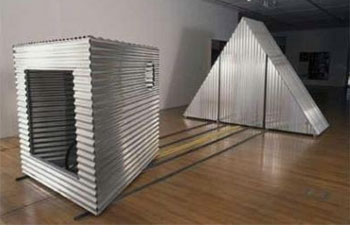 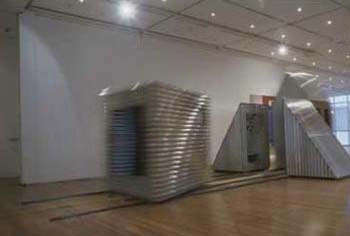 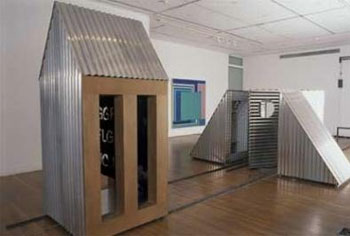